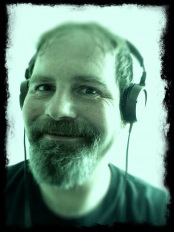 For many years Charlie was lost in the wilderness, a young punk going nowhere and stuck in a rut.  Eventually he got out of the city and moved to the countryside, it was here when life began to get better for Charlie.  He trained in Animal Care at College and Animal Management at University.  After some time working in the industry Charlie still felt there was something missing in his life.  He had tried for years to express himself, but had never found the means to really do it.  Then one day out of the blue he tried to write some music, and it was fun. He enjoyed the great response he received from his friends.  As we are all aware music needs music videos, and for this reason, soon after he began writing music, he began to make music videos.

He made music videos about Sporks, Taxonomy, Spiders and mental illness, to name but a few. Although some of these early works were amateurish, something that was noticeable was his sincerity in making them.   He was obviously passionate about what he was doing, for he would spend many long hours at his work station.

It has been a long process developing the skills that he now has today, and he has always been totally committed in developing them.  Charlie believes that it is better to create culture rather than just consume it, and it was for this main reason that in 2012 he switched off his television.  This gave him the opportunity to spend more time being creative without distraction, and through all the different ways he has endeavored to express himself, there is one that stands out as his personal best; Videography.

Charlie uses a range of techniques in order to create his videos; animation tools, photography, music editing software, video editing software and of course a photography package.  He has made videos for a range of artists, from rock to techno, and from ukulele songs to pop.  Videography is his passion, and music his love; together they make a beautiful marriage.

He has worked with musicians from different parts of the world: Preachers Son from Ireland, Zack Ward from the US, Penny Showman from Sweden, Darkfish from France, Sterbus from Italy and closer to home with Loretta Heyward from London, UK.  Charlie has a a particular style that may not suit all tastes, but he never disappoints his clients and if you do like his videos you may be surprised at what he can achieve.  It is through dedication and commitment that he makes this world that is quintessentially unique.